Now that Mi Yodeya has launched, I'd like to renew the request for a more-pervasive placement of our "professional advice" disclaimer. Currently, the following disclaimer is shown, in red, on the sidebar for new users only:

Like Wikipedia, this site makes no guarantee of validity, and does not offer professional (particularly rabbinic) advice. Treat information you find here as if it came from a crowd of your friends.

It is also in our FAQ and in the pop-up summary for the halacha tag (on the main site).

On the old mi.yodeya, this disclaimer was shown, in red, at the top of every page, to address an issue that is very important to members of this community. The three places in which it's included now represent, as far as I'm concerned, a half-measure that doesn't go far enough to make it clear to all users that they should not treat this site as their Rabbi.

Now that we've launched, I'd like to re-submit our request to make this disclaimer more pervasive on the site. Whatever code is developed to support this request could likely be used on other Stack Exchange sites that serve communities in which qualified professional advisers play a role, as indicated by the popularity of the general requests I posted on MSO and on Area51 Discuss.

Here are some alternative implementations to consider:

I have two objections, one practical, the other philosophical.

Practically, dismissible banners are both annoying and ineffective. They seem like a gimmick designed by the American legal system as a way to create Maximum Deniability in a court of law ("But, your honor, he clicked on the agreement!"), not a genuine Jewish way to provide education.

I've never seen a Shulchan Aruch with a printed disclaimer warning you not to use it to paskin. I'm sure when it was first published there was some consternation but there does not appear to be any mainstream belief that Shulchan Aruch per se should carry disclaimers, only that people should be independently educated not to paskin by it. And once they understand this rule, that's enough, you don't have to remind them every time they open the book. At some point the repetition will cause people to just ignore what you're saying.

I would much rather see those participants in this site who are concerned with this issue learn to phrase their questions and answers in a way that is consistent with their personal beliefs. If you feel like a question is asking for a psak and this bothers you, reply with an answer that says "This is not a definitive answer, for which you should consult your rabbi, but:

In this way you encourage participants of this site to write the disclaimer into any answers for which it applies, which will be impossible to ignore by the readers, and thus be substantially more effective than a click-through disclaimer.

I see now that two other SE communities, Health and Law, have professional advice disclaimers in the top-right corners of their front pages: 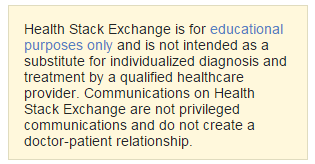 This would seem to be the right place to put our disclaimer.

The text of our disclaimer should be what we already have in our Tour, as that's the product of years of slow evolution and community scrutiny:

Like any library, Mi Yodeya offers tons of great information, but does not offer personalized, professional advice, and does not take the place of seeking such advice from your rabbi.

As documented in this post, its comments, and many other posts on Meta and on Mi Yodeya going back to the very beginnings of the community, such a disclaimer would address an ongoing discomfort that experts on Judaism have with posting answers about Jewish law on a public Q&A site - that their responses will be interpreted as or substituted for personal, professional advice.

Not the answer you're looking for? Browse other questions tagged feature-request status-completed design policy .

9
Use the new tag tip feature
18
CYLOR Disclaimer
19
Can I consult Mi Yodeya as I would a rabbi?
6
What is the origin of Yat Shevat?
10
"Post notices" for Halacha questions
4
Should we include our professional advice disclaimer on the About page?

18
CYLOR Disclaimer
10
"Post notices" for Halacha questions
3
The shabbat-yom-tov tag
7
Please enable Community Promotion Ads here
7
Allow editing of site-specific tag wikis in meta
5
The Privilege Page should show Rep Requirements for Post-Beta
4
Should we include our professional advice disclaimer on the About page?
7
Blacklist the Torah tag