I am in chat and I click on "site rooms": 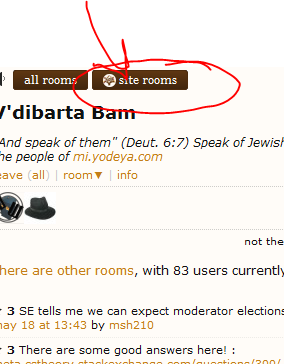 BUT if I try to change the URL to:
http://chat.stackexchange.com/?tab=site&host=mi.yodeya.com
It looks like this:

It has the old beta design and NO chat rooms!

What is going on here???

I have fixed the issue with the UI being half-network-wide and half-site-specific (i.e. using the judaism images but the stackexchange background).

Balpha is also correct to say that if you invent your own urls (based on nothing that the system has given you), then it is not unreasonable to expect odd results; however, the "half this and half that" offended my sense of correctness, even for an invalid URL.

If and when your other request comes to pass, then we would re-point those rooms. Until then: chat is correct.

Not the answer you're looking for? Browse other questions tagged bug support chat .

4
Why can't we use mi.yodeya.com?
7
"Jewish Life and Learning" in Data Explorer

2
OpenID Is Different on This Site
3
Can you design a Community Promotion Ad for Parashat Hashavu'a Chat?
3
Site chat rooms listed as SE-network rooms
2
How to ping other users
1
Reputation in Chat
11
chabadlibrary.org link structure has changed, and there are now many broken links