I occasionally search for "Judaism" across all SE chat sites, and I just discovered this comment from Jin Yang, SE's resident designer:

i know 0 about either one..

This is a bit of a surprise to me. I didn't realize that we were anywhere close enough to launch to justify starting on the design work, but I guess that Jin's getting the work into the pipeline early.

Jin / SE Staff: Could you please explain how this design process works, and what part the community will have in it?

Judaism.SE Community: Let's help Jin out! Please post ideas for concepts that could be included in the design: concepts, images, phrases, etc. Feel free to include anti-ideas like "Please don't make this look like the logo for the local Jewish retirement home!" Take a look at some of Jin's excellent designs on already-launched SE sites for some ideas about what differs between one site and another.

Designing a site is first about and keeping on the lookout for some inspiration and ideas. That's about where Judaism is in the design process. Jin asked us what sites have pretty much passed that event horizon where there there was little worry it would fail. Judaism came up in the conversation as "doing quite well."

Jin's really early, first-draft, preliminary design ideas aren't really appropriate for soliciting direct feedback and review. The site is not quite slated for graduation, yet, so we're not ready to start that process. As graduation approaches, Jin will post a few of his better design ideas here to get some first impressions and to solicit your input. The final designed will be based on your feedback.

There's no harm in talking about design ideas here. It's one of the 7 Essential Quesitions of Every Meta. But until the actual graduation criteria are met and tentative dates can be scheduled, we don't really start that design process in earnest. We want to give time for the community to provide input that drives these decisions.

Perhaps for the 404 page we can have some sort of reference to searching for chametz before passover, and the idea of 10 missing pieces of bread.

I (and, I believe, others) would very much like for this design to adopt the brand name that this community used in its SE 1.0 days and currently maintains as an unofficial alternative name/URL: mi.yodeya.

This phrase means "Who knows?" in Hebrew and is in the title of an extremely well-know Passover song. It fits the mission of this site very well, in my opinion. My other reasons for favoring this name are here.

The chief objection I've heard to this name is that it's Hebrew, which not everyone knows. Besides the fact that this particular phrase is more recognizable than most, I'd point out that many, many Jewish institutions that cater to a wide clientele have Hebrew names, including Hillel and most congregations in any denomination. In addition, names with no meaning at all are used on all kinds of successful products, including Joel Spolsky's company's latest offering and pretty much every search engine. There is no need for a product or service to have a name that everyone will understand; the main thing to avoid is people misunderstanding it and thinking that the product offers something that it doesn't. I think that there's little danger of this with "mi.yodeya."

I'd love to see a yad used as a design element:

A yad (Hebrew: יד‎), literally, "hand," is a Jewish ritual pointer, used to point to the text during the Torah reading from the parchment Torah scrolls. It is intended to prevent anyone from touching the parchment, which is considered sacred. The Vellum Parchment does not absorb ink so touching the scroll with fingers will damage the lettering. While not required when chanting from the Torah, it is used frequently.

A yad can be made of any number of materials, though silver is most common. The yad is often shaped like a long rod, with a small hand and an index finger pointing from it.

This is the most common style for a yad They can also be very ornate

And while many/most are, they don't have to be silver.

They can be stylized (as seen here and here), and can range from beautiful works of art to the completely tacky (you decide which is which).

In response to the comments: I wasn't so thinking so much about text elements, but rather, design elements. Given that, though, there are a number of unicode symbols for pointing hands:

When people think of Jewish learning, many of them think of the Talmud. There is a widely-accepted canonical format for its printing that has some distinct and recognizable design elements. You can see pages in this format by going here and paging through using the arrows. ("Amud" means page.) Note the nested commentaries in different typefaces, the propeller-like dividers on the sides, the spacing, etc. Also note the iconic standard cover page. 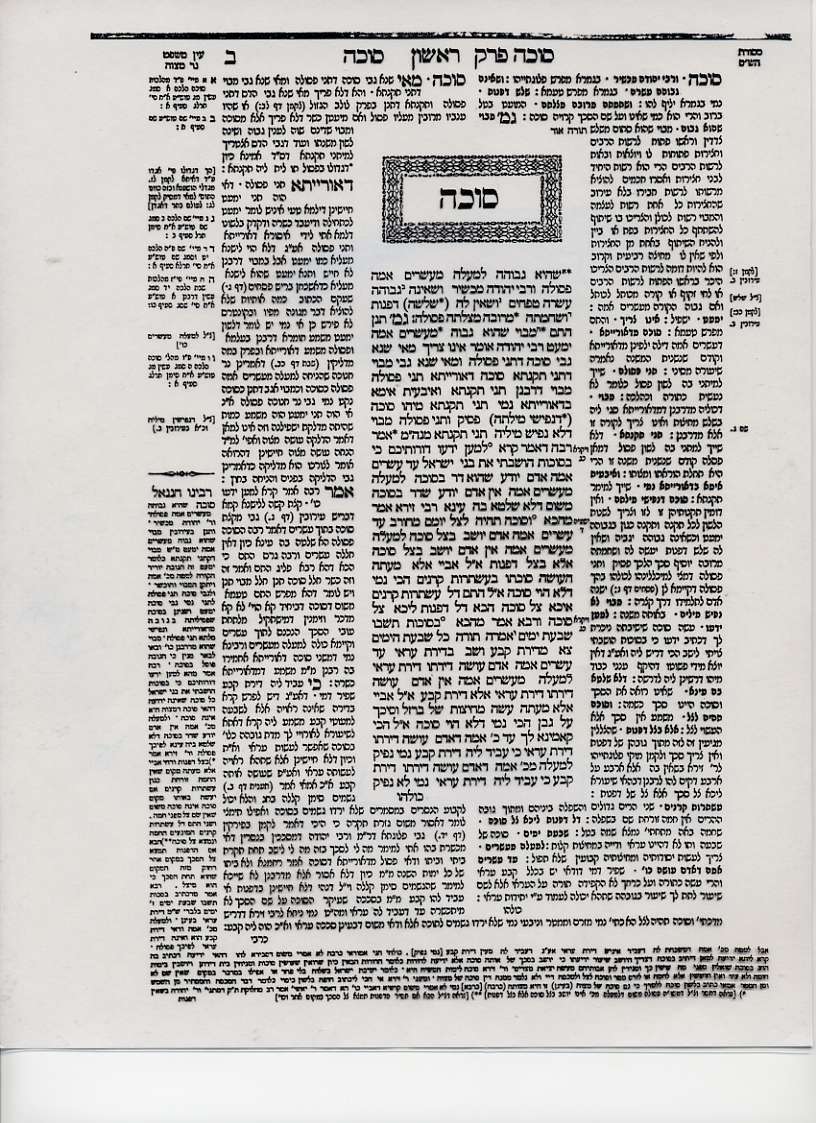 As has been mentioned by @Tal Fishman in chat, perhaps we can get the favorite icon switched to a six-pointed star (magen david - star of david) in the final design.

Edit: As pointed out by @Isaac Moses, this has also been suggested by @AviD

I would love to see the logo being the hebrew letter "aleph". Perhaps on a scroll... with atzei chaim (wooden handles)....

An idea for badges: stylized crowns.

In Avot 4:13, the image of a crown is used in a generalized sense to indicate status (priesthood, sovereignty) and achievement (Torah, good name):

"Good name" reminds me of "reputation," and the crown idea fits the metallic color heirarchy.

I'm not sure if it's related to this or not, but many publishers of Jewish books (e.g. Artscroll) use a stylized crown on their book covers.

Many people's tallit bags are embroidered with a stylized crown.

Here's an idea that combines "parchment/books", "living (not just study)", and "mi yodea": something that evokes the feel of a Pesach haggadah, complete with the occasional food/wine splotches.

I've already suggested a design idea, which I'll repeat here now that this discussion has begun:

A sefer Tora, open with lines displayed representing lines of text, would fit in nicely with the SO-SF-SE horizontal-lines theme.

Above all, I suggest the artwork for the site avoid images of human beings, faces in particular. This is somewhat traditional in non-secular Jewish art, as a way of avoiding graven images. (Or so we were taught in Hebrew School.)

For inspiration, you might look to the work of Mark Chagall, but keep in mind that his stained glass windows are a little bit "churchy", or at least might be considered as such in the US.

Not the answer you're looking for? Browse other questions tagged discussion 7-essential-metas design .

13
Design Ideas for 404, Captcha, and Error pages
6
Name our chat room
28
Design for Mi Yodeya
2
Can we get our own custom Enthusiast and Fanatic Badge?
9
Name of judaism.stackexchange.com
4
Why can't we use mi.yodeya.com?
4
The "This is a favorite question" Button
3
Proposed FAQ language explaining "mi.yodeya" references
1
A cool icon for accepted answer