How am I supposed to interpret the "Post Feedback" tool?

On the Anonymous and Low-Rep Post Feedback Tool: How am I supposed to interpret these data? I see a bunch of labels and numbers, but I don't understand what any of the labels refer to. What is "anonymous feedback," when you have to register and gain reputation to be able to give feedback? What is "feedback" as opposed to "votes"? What is "post score to feedback correlation," and "post feedback breakdown"? What are the little numbers (which I assume indicate "up" and "down" "feedback") under the questions on the other main tabs ("underrated," "overrated," "most helpful," "least helpful")?

Thanks for the feedback! Votes cast by those with less than 125 reputation are recorded, but do not change the publicly displayed post score.

The "feedback" by those who can't vote is recorded by the system. The page you link to is where that information is tracked. The top half relates to the amount of feedback and actual votes:

The first line tells you how many total feedback actions there have been (i.e. clicks on the up or down arrows that didn't count as votes) and how they are distributed between up feedback and down feedback.

The second line gives you the same information regarding actual votes. this now allows you to see that there are a lot more actual votes than non-vote feedback actions.

The third and fourth lines show the distribution of non-vote feedback between registered users and anonymous users. Even when not logged in you can give feedback; when you do so you receive the following message: 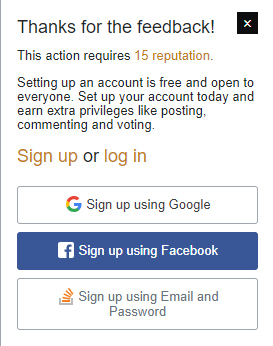 The statistics page is merely showing that the vast majority of non-vote feedback comes from anonymous users rather than registered users. This may be because registered users quickly reach the voting thresholds, or because they are more aware of how the system works and know that their "votes" don't really count so they don't bother with them.

The next section of the page provides you with information about how much feedback posts have in relation to their scores:

The final section provides the breakdown of how many posts have a given amount of feedback:

You can add up the totals for each category and see that it exactly equals the total number of posts.

Note, what I've written here is largely based on my own understanding gleaned through using the page, helped somewhat by the text that appears on some areas when you hover your mouse over it.

Not the answer you're looking for? Browse other questions tagged discussion moderator-tools .

3
Is the meta site supposed to support html?
2
What should our FAQ material contain? / How should we describe the scope of this site?
12
Feedback for "Hagada - Mi Yodeya?"
5
How does user with low rep address a locked post?
5
Feedback for "Chanukah - Mi Yodeya?"
7
Feedback on Sefaria from the MiYodeya community
4
Average number of comments per post: Mi Yodeya vs the rest of the Stack Exchange Network